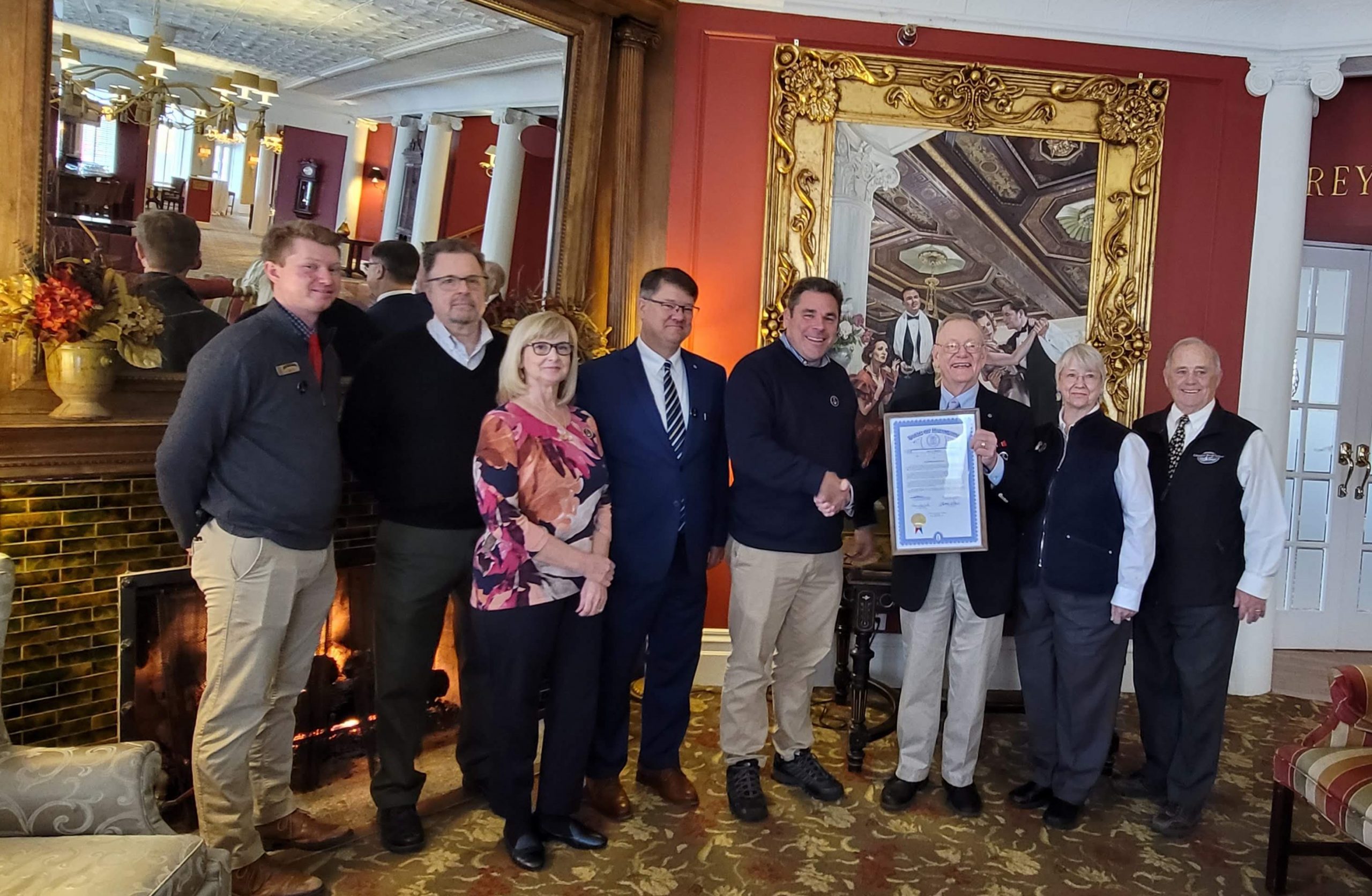 State Rep. John Damoose of Harbor Springs, fourth from right, presents a legislative tribute to leadership of Stafford’s Hospitality, including founders Janice and Stafford Smith, second and third from right, at the Perry Hotel in Petoskey on Friday, Nov. 12, in recognition of the hotel and restaurant company’s 60th anniversary.

“At these time-honored organizations, people have contributed so much to the local culture and economy,” Damoose said. “Family businesses like Willson’s Garden Center and Stafford’s Hospitality, as well as cultural institutions like Crooked Tree Arts Center and Little Traverse Civic Theatre, help make Northern Michigan communities such spectacular places to live or visit.”

The 50th anniversary of Crooked Tree Arts Center, which offers performances, exhibits and classes related to various art forms, such as visual arts and dance, was also honored by Damoose. The organization was formed in 1971 by several local residents to support artistic creation and appreciation in the community. Crooked Tree also has a location in Traverse City, which it acquired through a merger in 2015.

In 1961, Stafford and Janice Smith acquired the Bay View Inn, and the family-owned business they founded, Stafford’s Hospitality, now operates several hotels and restaurants in Petoskey, Bay View and the surrounding area. Damoose joined the Smith family and other members of the company’s leadership to celebrate its 60th anniversary.

“I would like to thank Nikki for raising awareness and helping recognize these milestones,” Damoose said. “The chamber is an asset for so many businesses in the community.”

State Rep. John Damoose today announced he has hired Juliana Woolford to serve the people of Northern Michigan and the Eastern Upper Peninsula in his state office.

Rep. Damoose talks about his testimony before the House Transportation Committee on Tuesday on his HB 5315, which designates the Mackinac Bridge as critical infrastructure and would increase penalties for trespassing from a misdemeanor to a felony. Rep. Damoose says he now expects the Committee to approve an amended version of the bill as soon […]

Rep. Damoose talks about the path ahead for his HB 5557, part of a two-bill package, with HB 5556, that would allow community colleges in Michigan to grant Bachelor of Science in Nursing (BSN) degrees. The plan is out of committee and before the full House.